Posted on December 2, 2021 by Jonathan Symcox

Phil Zeidler was a healthy 38-year-old when his body went into septic shock and he was placed in an induced coma. The resulting business is looking to change attitudes around death

If you were to die today, what would be the impact on your family?

A difficult enough sentence to write, the fundamental morbidity of the question also prevents people from taking steps to protect their loved ones if the worst should happen.

“Every day in the UK, 116 children lose a parent – and half of them have no [life insurance] protection in place at all,” DeadHappy co-founder Phil Zeidler tells TechBlast. “So not only are they having to deal with the massive upheaval and grief of losing a parent, but the family will probably face financial ruin.

“It’s devastating – and all for the sake of getting a premium which could cost a couple of quid a month.”

Zeidler was forced to contemplate the difficult question himself back in 2005 when, as a healthy 38-year-old, his body went into septic shock as a result of an infection he had barely noticed.

“I just didn’t feel very well one day and went home. My wife, who’s a doctor, said ‘go to the hospital’. I woke up three weeks later in intensive care,” he recalls.

“My body just shut everything down and I nearly died. When something like that happens, you do pause to reflect. I had a wife, two young children and wondered what would have happened if I had died.

“People die. It’s a fact. You just don’t know when your number will be up. There’s a taboo around death and people don’t like talking about it, so they don’t plan for it.”

The family had life insurance and a will in place. However when Zeidler tried to make changes to the policy, he was unable to do so.

“For some time afterwards, it was always niggling in the back of my mind: why is it so appalling? Why is life insurance so different from general insurance? Why can’t you change it? Why isn’t it flexible? Why do they overcharge for it?

“It takes forever to buy life insurance, and it’s complex. A lot of people don’t ever get through the process because it’s just so difficult. There are all sorts of barriers: the language they use is full of jargon, it’s a morbid topic, and they don’t engage customers in any way. They don’t sell the amazing things that life insurance as a product actually can do.

“Plus you can hardly ever buy them online – you end up having to speak to someone, which is not how millennials buy products.”

Already a serial entrepreneur with a background in insurance, he would exit his third business Junction – part of comparethemarket owner BGL Group – in 2007. Turnover at that point was £84 million, with profit of £20m.

He invested in a variety of businesses, holding a number of non-exec roles – at both commercial and charitable organisations, including deputy chairman of Northampton General Hospital – but still that question bothered him.

In 2014, he teamed up with technologist Andy Knott to launch DeadHappy. The Leicester-based firm prices its life insurance annually based on a customer’s current age and risk level – not a prediction about their risk of dying across the next 20 years. 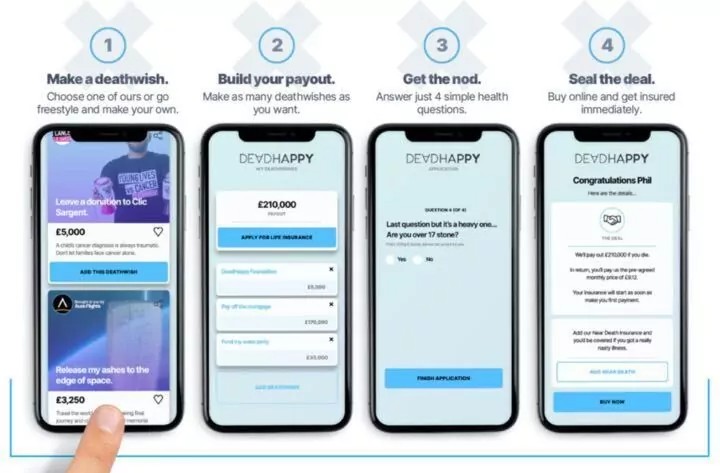 “No one fixes health insurance, no one fixes travel insurance. When can you afford to pay more? Is it when you’re young and starting out in life, when actually risk is really low?” asks Zeidler. “Why are you overpaying when you’re relatively cash-poor – you’ve got young kids, bills to pay and all the rest of it – just so that you don’t have to pay so much when you’re a lot older and hopefully able to pay more?

“We think there’s about £1.2 billion of overpayments going on because people don’t use a product like ours.”

DeadHappy, which saw triple-digit growth in the last 12 months after launching in early 2019, has seen a whopping 87% year-on-year rise in consumers searching for ‘deathwishes’ on its platform. Considered the brand’s USP, these are a way of helping customers express what they want to happen when they die.

“Some of the options we give them are the financial, responsible stuff – we have standard deathwishes for paying off the mortgage, school fees, one for debt,” Zeidler explains.

“We get the real engagement from customers when it comes to the other stuff: opting for a Viking or Star Wars funeral; to have your ashes fired into space so you’re up there when your loved ones look up at the stars at night. We partner with companies that can carry out these wishes.

“It might be leaving a pot of money to buy their son a brand new football kit every season or sending a bunch of very good mates on a final golfing tour in Vegas – one last hurrah.

“If you do this on a life insurance policy, you can put a pot of £25,000 in there for them and it might only cost you an extra £50 a month. You can do some pretty amazing things.”

Zeidler sees DeadHappy as a death services provider. Digital wills are already on the platform and the co-founder says it is looking at helping people access affordable funeral services in the future, while he expects to launch in its first overseas territory by the end of next year.

The firm has raised three rounds of VC funding amounting to around £10m from Octopus Ventures, e.Ventures, Headline and Channel 4 Ventures, as well as £2.4m from a crowdfunding campaign featuring 1,200 investors including VentureFounders.

It employs 28 people at present and a recruitment drive is imminent. “We’ll probably double that over the next year or so,” reveals Zeidler. “We’ll be recruiting quite a large number of software engineers, data guys, product people; and then in the growth area we’re looking for marketing expertise, partnerships, the relationship management space.

“We’ve identified 15-20 roles that we’ll be recruiting for pretty quickly.”

Zeidler abhors hierarchy and says his colleagues refer to him simply as Phil. “I don’t want people to call me the CEO because it comes with a sort of tag where people treat you differently – and that’s unhelpful.

“I definitely don’t have all the answers. I will definitely be wrong on lots of occasions. I definitely need to be challenged. I will mess up like anyone else.

“I think that’s probably the most important continual lesson I’ve learned in life: don’t judge people. You have to be gracious wherever you can, and give people every opportunity if something has gone wrong to put it right. And more often than not people take it.

“How you treat people is really important. Do you stop to think about putting yourself in the other person’s shoes? Do you know what’s been going on at home, what challenges they’ve got? There might be all sorts of different reasons why people are behaving the way they do.”

He says DeadHappy “doesn’t have any rules”. “We just don’t deal with corporate b*******. We’ve never had set hours of work: come into the office if you need to, but if you don’t, don’t.

“One of our values is ‘you’re not a child’. If we don’t tell people what time to get up in the morning, how to dress, what to eat for breakfast and how to get to work, why would we tell them what time to be in?

“People are adults, so treat them like adults. Make sure they’re really clear about what they need to do in terms of the objective – so you agree that – and then let them crack on.”

How technology has changed the world of taxi insurance

Focus on one thing – and do it better than anyone else

How technology has changed the world of taxi insurance

Focus on one thing – and do it better than anyone else