This was one of Stephen Alexander’s favourite quotes that his former colleagues at Cheshire-based First Internet chose to remember him by when he died of cancer in 2019.

The larger-than-life entrepreneur had started the digital agency from his kitchen table over 20 years earlier and had built its revenues to nearly £1m when he sadly died.

In the wake of the tragedy a new management team comprising of client services director Kat Rodway, technical director Scott Baxter and marketing director Julaine Speight was formed and they undertook an MBO.

Speight told TechBlast’s latest Going 4 Growth roundtable that the trio treated First Internet as a startup despite the fact it was more than 20 years old.

“Stephen had done a brilliant job but we wanted to run the business in a different way,” she says.

“Even though the business has over 20 years old we treated it as a restart because we weren’t very well known.

“Nobody knew we were down this little alley in Hale Village even though we were doing some good work with some good clients. 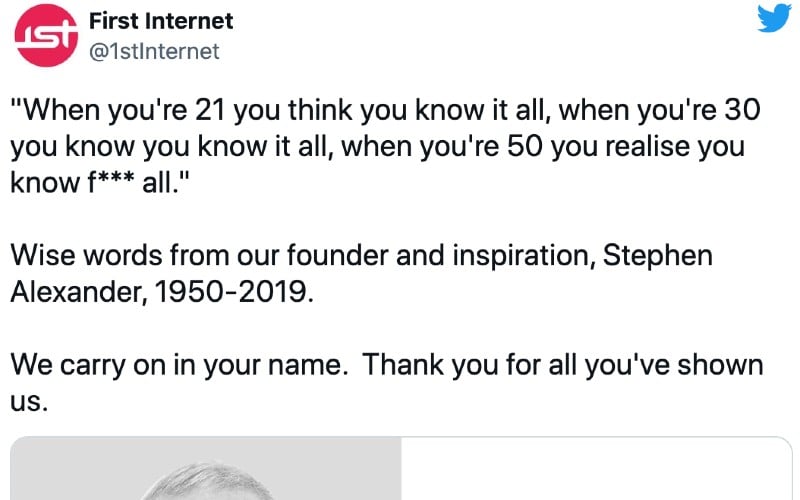 “When we bought the business and signed on the dotted line in December 2019 after months of going back and forth with lawyers we made a deliberate decision to really push ourselves forward.

“We put our money where our mouth was in terms of putting ourselves in for awards because we were doing great work but not enough people had really heard of us.

“We invested in ourselves, in terms of PR, recruitment, training and more and maybe went backwards to then go forwards, but it had to be done.”

Speight said they’ve been able to build on the foundations created by the founder and put their own stamp on the business.

“It’s taken a few years but we’ve won some awards, we’re getting our name out there  and people are starting to hear about us,” she explains.

“People ask us where we’re from and when we say ‘First Internet’ they reply ‘we’ve just been talking about you’. That hadn’t really happened before.

“When we did the MBO we had to reframe what we were doing. Marketing is changing every single day so you have to look at every single week as if it’s fresh and brand new.

“Our office is spread over two floors but we moved everyone upstairs so we all could all learn from each other. Remote working during Covid is all very good but our creativity began to taper off. Bouncing ideas off each other helps us refresh and learn more every single day.”

Speight joined First Internet originally in 2011 but left to co-found her own business before returning at the beginning of 2019 and becoming a co-owner after the MBO.

“The business I co-founded didn’t quite work out but it’s one of those things that make you appreciate that everything happens for a reason,” she says.

“What I learned totally set me up for coming back to First Internet and I wouldn’t have been able to do what I’m doing now without having gone through all of that.”