Against a springtime backdrop, Simon Burges cuts a relaxed figure on a leather sofa at BiP Solutions’ Glasgow HQ. It wasn’t always this way

There have been many incarnations of BiP Solutions in the journey from print publisher to the buzzing procurement intelligence firm it is today.

CEO Simon Burges has lived through every incarnation: boyhood memories of a cold Portakabin where his father cut out notices from newspapers to create a magazine, to the terraced house with a printing press rumbling in the basement, to today – a three-storey glass-fronted HQ on the banks of the River Clyde.

The second-generation family business was founded in 1984 by Manchester-born Ron Burges and rode the wave of emerging technology – pivoting from print to data disks to a digital-first business which connects buyers and suppliers.

“Each generation has been a business owner,” explains Simon.  “I think there’s a very clear pattern between what my grandfather did, what my father did, and what I’m doing now – it has all been based on ideas and seizing opportunity.”

The entrepreneurial spirit is clearly a Burges trait, starting with Simon’s grandfather Les who ran a grocery shop in Urmston before relocating to Glasgow and buying a petrol station.

His son Ron followed in his footsteps taking on laundrettes and contract cleaning before spotting a gap in the market – a central directory of available tenders to bid for more work.

Simon said: “There wasn’t any level of transparency back then because procurement was really seen as a back-office function.

“It wasn’t obvious where people could find this information and that’s where the idea for Contrax Weekly came from – a publication which aggregated contract opportunities to drive competition.”

There was never any pressure to join the family business but after years of long hours and late nights in the hospitality sector Simon decided it was time for a change.

After managing 100 people in bars across Lanarkshire, the pivot to checking data disks took some adjustment.

“My father said: ‘Look, there’s a job if you want it, but you’re going to start at the very bottom.’

“He set some clear ground rules like ‘I’m not dad in the business, I’m Ron’ and that still stands today. It was clear that there would be no favouritism and I wouldn’t have wanted it any other way. There were people who had been in the business a long time and had got it to where it was.”

He adds: “I found it tough to be fair, I didn’t understand how to work a computer – I’d never needed to in the industry I’d come from.”

But the ground-up approach meant Simon would get to grips with every aspect of the business starting in testing disks and moving through auditing, purchasing, and marketing before taking the reins as CEO in 2018.

One of the biggest breakthroughs for BiP Solutions came when it won a contract with the Cabinet Office to publish central government contracts.

It went on to win work with the Ministry of Defence on a title around supplies, infrastructure and estates – leading to a portfolio of subscription-only magazines such as Contrax Weekly, Public Sector Property and Government Opportunities.

But with the explosion of the internet, it was time to pivot again – online – and they were the first in Europe to create a platform for buyers to publish their tender notices electronically.

BiP Solutions developed a suite of digital products to connect suppliers and buyers – such as Tracker, Delta and CompeteFor enabling the public sector to do better, more transparent, business.

“Procurement today is a key agenda item but back in ’84 it was quite archaic. It was a stores function and people probably won business through who they knew.

“Fast forward to today and government see public procurement as a key lever for economic growth. They’re really focused on procurement reform and how it can be a lever for the greater good of society, things like – sustainability, social value, climate and supporting local economies.

“It’s about creating better value for the taxpayer, which was never really considered before, and the delivery of innovative public services.”

With 140 employees across the UK and a global supply chain, BiP Solutions now counts Crown Commercial Service, the Ministry of Defence, NHS England, Scottish and Welsh Governments and several local authorities among their growing client-base.

And their platforms have opened up the supply chain to hundreds of thousands of SMEs giving them the opportunity to work on national infrastructure projects such as HS2, Crossrail, and the 2012 London Olympics.

Not bad for a business founded on an idea, a pair of scissors and a Pritt Stick. 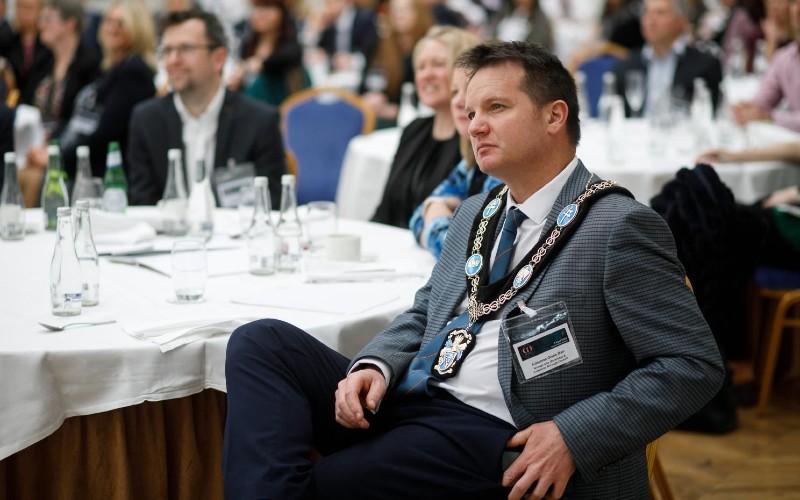 A guest at the GO Awards NI, organised by BiP Solutions to recognise excellence in procurement

What the future holds

So, what’s the next incarnation of BiP Solutions?

Beyond doubt it’s centred on tech and the realisation of two years’ worth of investment – introducing artificial intelligence into products to increase search relevance and boost the visibility of tender opportunities.

Tellingly, it has also built up its events portfolio post-COVID with 12 live national procurement events and seven online in 2022 – across healthcare, infrastructure and defence.

It is also building its media and marketing offering with Cadence Marketing, run out of Salford, to get suppliers early engagement with key decision makers in the public sector.

With a target to double business growth in the next three years BiP Solutions is aiming to hit in excess of £20m revenue and it’s clearly an exciting time for the man at the helm who, like his father and grandfather before him, can see opportunity in what lies ahead.

“The thing that keeps me going is continual progression – my objective for the business when I became CEO was let’s take it to the next place,” says Simon.

“I’m not interested in standing still. If we weren’t doing the things we’re doing today – which are challenging and the world is moving quick – I would get bored. We’ve never invested so much into the business in terms of our product innovation programme.

“I think there’s a great opportunity for us. We’re in the right space, we’re investing in technology, we’ve built the senior management team, we’ve analysed our market spaces and we’re now about to put the foot down on the pedal and go to market.”

Profitability on a knife edge for 2.1m UK SMEs

Profitability on a knife edge for 2.1m UK SMEs