Sir Ian Livingstone: The secret to a billion-dollar exit

The videogames industry rivals FinTech as the UK’s flagship technology sector, with multiple billion-dollar exits in the last year.

One man central to many of these deals is Sir Ian Livingstone, who co-founded Hiro Capital with fellow entrepreneurs Luke Alvarez and Cherry Freeman. Knighted in the New Year, the games legend was chairman of Sheffield-headquartered games developer Sumo Group before it was sold to Tencent recently for £1 billion.

Following Hiro’s recent launch of a blank-cheque company on the London Stock Exchange, which raised £115 million to invest in gaming and metaverse technology companies, it this week revealed a second private capital fund of £250m.

“There’s a big appetite for games now. It’s not surprising because the pandemic showed what an incredible industry it is: revenues are up, no one was furloughed and everyone worked from home using cloud-based development platforms,” he tells TechBlast.

“It’s a perfect industry for a post-COVID world: a creative knowledge base, high tech, high skills, high salaries, export-focused on day one, intellectual property-creating. And regional, which is so key to the government’s agenda today: you don’t have to be in London to be a successful games maker.

“And, of course, one that has unicorn potential.”

Sir Ian was an early investor and former chairman of Playdemic, the mobile developer behind Golf Clash which was sold to EA for $1.4bn in 2021. Hiro also backed Tonic Games, the studio behind Fall Guys which sold to Epic at a unicorn valuation last year, among 21 early-stage investments in the last two years.

It is a world away from the 1970s when he and Steve Jackson set about building Games Workshop – and with it an entirely new industry.

“We were living in a shared flat [with our schoolfriend John Peake] and our passion was playing board games. We discussed how we could turn this hobby into some sort of fledgling business and so we decided to publish a newsletter,” he recalls. “We sent Owl and Weasel to everybody we knew in games. Gary Gygax, who had just invented Dungeons & Dragons, got hold of a copy and wrote to ask whether we would like to review his game.

“We opened up this plain box and entered a world of heroes and wizards and thieves and clerics, one which took you on a fantastic journey of the mind… it opened up your imagination like no game had ever done before.”

The duo asked if they could import six copies. “On the back of that order, we got a three-year exclusive distribution agreement for the whole of Europe!” laughs Livingstone. “Gygax was also operating out of a flat in Lake Geneva, Wisconsin and he was just delighted to have a UK agent: we were both role-playing as businessmen around this role-playing game!”

Taking their business idea to a bank manager proved fruitless. “We told him we had this great game where you explored dungeons, killed monsters and found treasure…. he looked at us like a dog watches television! He had no idea whatsoever what we were talking about.” 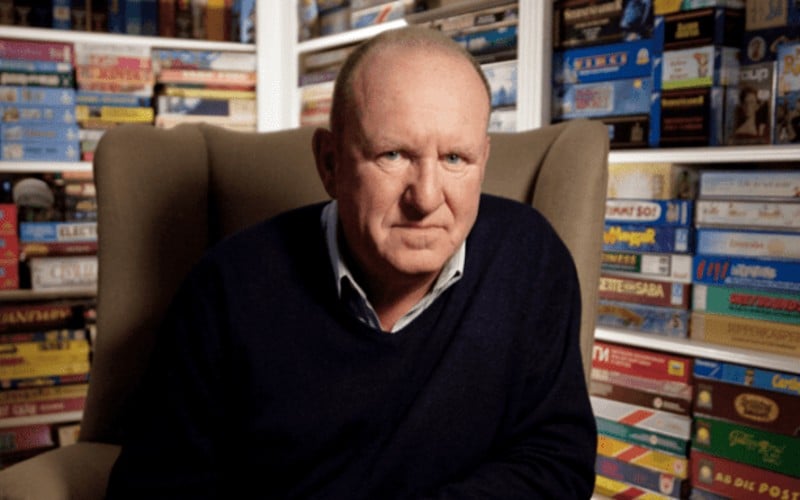 Having found a tiny office, they slept in Jackson’s van for several months, showering in the local squash club each morning before working on their mail orders until midnight.

“When you’re driven by passion, it’s not seen as hardship,” says Sir Ian. “But as we weren’t able to raise finance in any way, and it was all done out of cash flow, we learned pretty quickly the importance of getting investment in early. If you’re starting off, ask friends and family, bootstrap it then try and get an angel investor as soon as possible. When you scale the business, then maybe look to VC funding.

“We didn’t have any of that, so we did it very slowly. It was three years before we opened our first shop in 1978. And then, slowly, the business started to expand.”

Once the three-year distribution agreement ended, Gygax approached the pair with an offer of a merger. “We said no because Steve and I were young, independent Brits at that time. I’m really glad we didn’t merge because we forged our own destiny – and were able to create, in Warhammer, really valuable IP for the UK.”

Replacing D&D with Warhammer would prove transformational for the business and give Livingstone a mantra to do business by. “When you have your own intellectual property, the world changes again,” he says. “No longer were we at the behest of the owners of D&D. Owning IP has been my mantra [ever since].

“We sold out of Workshop in 1991 to a management buyout – some might say a little early, because it’s now worth £4bn on the London Stock Exchange!

“But we learned an awful lot during that period. In the beginning we were making it up as we went along because there was no established industry – but I was then able to leverage all that experience into videogames and it made me a much better operator.”

Startups must remember that cash is king

A spell as vice chairman at studio Domark would see him merge four companies into one newco – Eidos – which floated on the London Stock Exchange. It acquired studio Core Design the following year, which was working on a new game named Tomb Raider. The franchise would go on to sell more than 75m copies.

“When I was chairman of Eidos, the whole value was really underpinned by owning the IP – Tomb Raider, Hitman, Championship Manager, Deus Ex and other global blockbusters,” says Sir Ian. “You weren’t having to compete with others for [sports or movie] licences.

“You could also licence out: incremental revenue from the Tomb Raider movie and merchandise helped build the awareness of the brand but also underpinned the value of the company.”

He would leave in 2002 following a high-profile exit to legendary Japanese studio Square Enix. “I’m not very good at hierarchy,” he explains of that decision. “I like flat structures where people can feel they’re part of something collectively and want you to succeed as a team.”

Taking his first steps as an angel investor taught him the value of investing in people as well as the businesses they are looking to build. He points to the founding team of Paul Gouge and Alex Rigby, who led Wilmslow studio Playdemic during acquisitions by Warner Bros in 2016 then EA in 2021 – finally leaving just a week ago having built mobile game Golf Clash into a worldwide smash hit – as the perfect combination of business and technical brains.

“I have a big list of due diligence points, but the most important thing is if the senior leadership team is able to execute on their ideas,” says Livingstone. “I invest in people more than I do in businesses – if I meet a team with a great business leader and a great creative visionary, working in tandem together on an equal footing, then that ticks a lot of boxes.

“It’s not an easy business. But if you get it right, you get it hugely right. It’s no surprise that quite a few unicorns have come out of the games industry: a small team like Playdemic of 60 people being sold for $1.3bn – that doesn’t happen in many other industries.”

Livingstone concedes that it is a shame so many leading UK studios are now owned by overseas companies.

“People assume the games they are playing are made in the USA, Japan or China, but the games industry in the UK is monumentally successful and punches way above its weight. This content creation has always been underserved by capital,” he says.

“That’s why some of the biggest franchises created in the UK are now foreign-owned, such as Grand Theft Auto and Football Manager – they’re made here, but they’re not owned by UK companies.

“One of the things we’re trying to do at Hiro is move people up the value chain of ownership so they don’t have to sell out too soon.”

Hiro now has a team of 30 which includes experts in free-to-play games, NFTs and crypto, eSports, finance and technology – a full stack of support for its portfolio companies to tap into when needed.

Also the co-author of the Fighting Fantasy gamebook series with Jackson in the 1980s and 1990s, Sir Ian is the founder of the Livingstone Academy, a technology-focused school for ages 4-18 that aims to equip its students with creative skills for the digital world.

Asked for a nugget of advice for startup entrepreneurs, Sir Ian replies: “If you are ambitious, don’t be afraid of taking on investment: some people may be happy with a cottage industry existence, living off the earnings of whatever they create, but if you want to scale your businesses you need to get capital in – it’s better to own 50% of something big than 100% of something small. It accelerates your ability to operate and execute on whatever you’re doing.

“And don’t be afraid of failure. Failure is a success-work-in-progress – but fail fast. Don’t keep trying to make something work if it’s not working. Take the learnings and apply it to the next project; don’t just give up.”