Three million people in the UK are living with cancer. Paul Landau is aiming to help them manage their journey through Careology

There are few experiences in life more daunting than facing a cancer diagnosis.

Alongside the devastating contemplation of whether you or a loved one will survive, there is a pressing need to learn the methods for managing your condition to optimise the chances of a positive outcome.

When Paul Landau’s wife Lucy was diagnosed with Hodgkin’s Lymphoma in 2015 – days before she would give birth to their second child – he watched her go through six months of gruelling chemotherapy, consume thousands of pills and contend with neutropenic infections as well as endless blood transfusions, biopsies, scans and appointments.

“It was my first exposure to cancer. Most people have been directly or indirectly affected by cancer through friends or family,” he tells TechBlast.

“That, blended with how much responsibility is put on that person when they’re at home to often make what could be quite clinical judgement calls, made me see what an important opportunity there was to create something to help people going through that.”

He was struck by his wife’s determination to avoid being a nuisance. “She became so sick of being sick that we would regularly hold debates over whether she really had to let her nurses know about the side effects she was suffering, because she didn’t want to go back to hospital for more prodding,” he writes on the website of Careology, the startup he would go on to build and which featured in second spot on our sister publication BusinessCloud’s recent HealthTech 50 ranking.

He adds to us: “We learned very quickly that patients often get that wrong. They wait to pick up the phone to report a side effect and things that could have been nipped in the bud had the team been informed earlier become more complicated and difficult to treat.”

After a relapse in 2019, Lucy has now been cancer-free for two years.

While supporting his wife, Paul exited the wearable technology firm he had founded and led for 11 years – Fitbug was acquired by an Australian company for its IP – and began to explore how he could exploit his background in consumer technology to help people going through their own cancer journey.

“We wanted to create something that was really effective in helping that person feel much more safe and in control as they’re going through their treatment,” he says. “If we could create a tool to leave someone better equipped to manage all that whilst feeling safe and securely connected – that for me was a really big win.

“Once Lucy had finished her treatment, I had as many cups of coffee as I could with the team that actually treated her to determine whether this would be a sensible idea. I talked to clinicians, consultants, nurses, other patients, to understand if this was a viable business and something that would be helpful.

“After a few months, it became very clear that yes, there was definitely a gap in the market. I started piecing together a small clinical advisory group and we began to build out the initial concept screens to bring it to life.”

Paul is keen to stress the technical rigour behind the app. “People can find some great support within online groups, but if you really need sound healthcare advice, it has to be backed up in a clinical sense,” he explains.

“For me, the sweet spot was to make the user interface feel really easy to use, engaging and helpful, while ensuring that technical rigour under the hood.

“The underlying principle here is how do we blend the best of both worlds between consumer HealthTech and MedTech, which are quite different disciplines? That is absolutely key.” 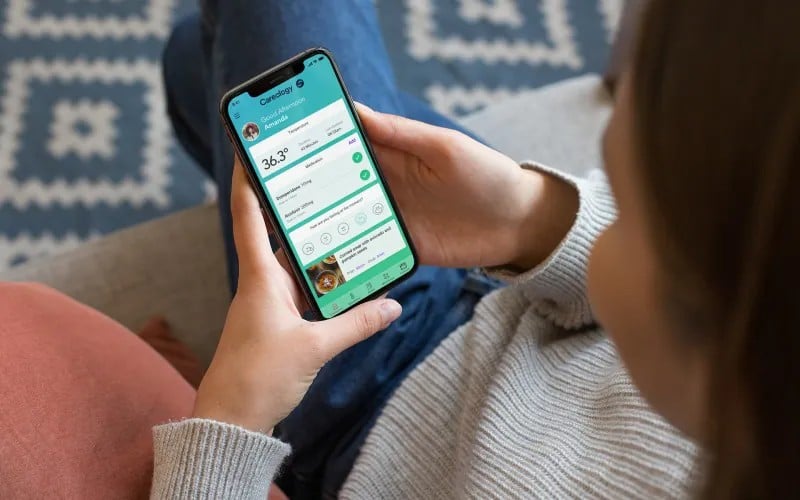 Careology connects to wearable devices, such as smartwatches, allowing it to track changes in the person’s physical condition in real-time. It also helps them to journal their thoughts and feelings, track side effects, medication and appointments.

For clinicians, it takes information from patients and presents it in a ‘virtual ward’, providing a rich, holistic overview of all those in their care.

The London startup, which has been backed by angels to date and is looking to raise a Series A round this year, licenses its software-as-a-service platform to healthcare providers. It has worked with Lloyds Pharmacy Clinical Homecare for more than a year, while in 2022 it has announced a strategic partnership with Macmillan Cancer Support and a pilot with another major charity, Nuffield Health, at its hospital in Derby.

“Once a provider comes on board, it then becomes a key part of their platform,” says Paul.

“We’ve got really good feedback from the early deployments that we’ve had. Now it’s very much around accelerating that growth through the NHS, while we’re also getting a lot of approaches now internationally.”

There are three million people living with cancer in the UK – defined as someone who has received a cancer diagnosis at some point in their lives – and that figure is expected to reach four million by 2030.

COVID-19 has had a massive impact: a recent report by the National Audit Office estimates that up to 740,000 people in England with potential symptoms of cancer who should have been urgently referred by GPs since the first lockdown may have been ‘missed’.

“Cancer services have been hit so hard by COVID,” Paul reflects. “We’ve all read about the cancer backlog: COVID has been a real catalyst for digital tools and the need to embrace digital to help build capacity into the system.”

Among Careology’s angel investors is chairman Carl Uminski, CEO of Somo Global and NED at Hubble.

Is there a difference between how he has approached building his HealthTech and wearable tech firm FitBug?

“I’ve put in place a more senior team more quickly,” he says. “Ideally, you want to hire people who are better than you – you need to surround yourself with people who are really smart and have knowledge that you don’t.”

How tech is reducing hospital anxiety for children

Meet the tech startup looking after pets and vets

Meet the tech startup looking after pets and vets