Is this the tech unicorn you didn’t realise was a unicorn or even a tech business?

In tech circles everyone wants to be a unicorn, which is defined as a company with a valuation of more than $1bn.

In the North West alone six companies – THG, The Very Group, Radius Payment Solutions, AO.com, AutoTrader and Boohoo – have all been reported as being unicorns.

However, could the mythical world of unicorns be about to be joined by a dark horse?

Chester-based Sykes Holiday Cottages wouldn’t be the first name on most people’s list of potential unicorns but that might be about to change.

Mid-market private equity firm  Livingbridge first invested £54m in Sykes Holiday Cottages in 2015 and when Vitruvian Partners got on board in 2019 it’s thought the cheque size was closer to £400m.

The growth in the UK’s leading independent holiday home provider has been on the back of a huge investment in people and tech.

Although it remains to be seen if Sykes joins the ranks of UK unicorns, Donoghue  says there’s no denying the company is a fully fledged tech business.

“I would describe us as a technology company masquerading as a holiday company,” he says. “We use tech to scale the business. Technology makes it easier for people to do their job. 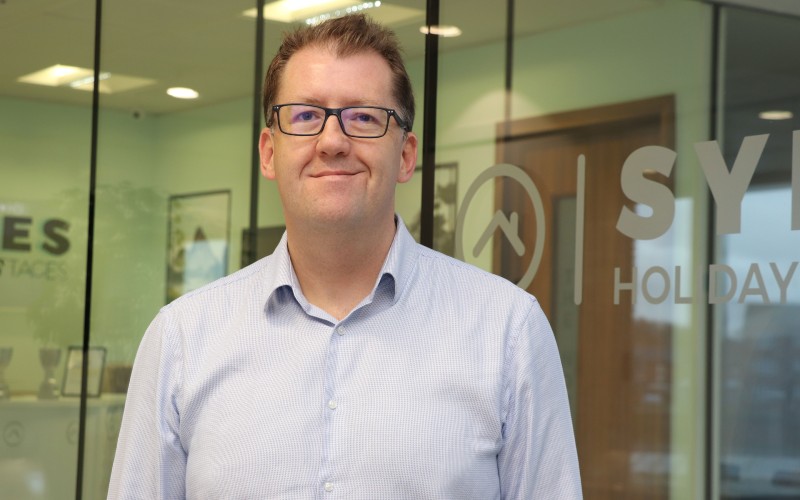 “We are about trying to break down barriers and remove friction and make it easier for customers to do business with us. Technology allows us to do that.”

“If you put your property with Airbnb, Booking.com etc you have to do the heavy lifting yourself,” he says. “If you come to us and give us your keys, we will transfer your funds and do anything that the owner needs. We blend service with technology.”

The business was founded in 1991 by Clive Sykes, who eventually raised private equity investment.

Donoghue, who has previously held senior roles at MoneySupermarket.com and TUI, joined in 2016 to accelerate the growth.

They now take 2.4m people on holiday and handle around £300m of transactions a year and recently acquired their first international business in New Zealand.

“We recognised that the only way to double it was to acquire businesses similar to us,” he says. “In order to that we used our data to identify where we had lots of excess demand.

“We then used our data to find other businesses similar to us and then we approached them and asked ‘how can we acquire you?’

“Since 2016 we’ve made 20 acquisitions. We use our data to understand where we can add value. We’re a data-led business.”

Donoghue, who is learning to keep bees in his spare time, identifies five key tech products that have transformed the business, all developed by the in-house team of almost 200 engineers, data scientists and product managers.

The first is a real-time management tool called Bidpro for paid search activity. “It’s a ROI model,” explains the CEO. “How do you put £1 in to make it £1.50, managing millions of key words?”

The second is an in-house revenue management system called Prism which makes it easier to make price changes to better reflect changes in supply and demand.

The fourth, and arguably most important, is called Holmes. This allows staff to see the company’s key metrics on a dashboard. “It tells us what we should be doing, where we currently are and we can make decisions based on it,” says Donoghue.

The fifth and final tech tool the company use is the net promoter score – or NPS. Although not unique to Sykes the way they use it probably is. All staff can see customer feedback and 25% of staff bonuses are based on the NPS.

“If we can increase the NPS it increases the whole performance of the business,” says Donoghue.  “We embed it in our organisation. We don’t just measure it, we take action on it.”

The CEO  says technology provides more insight into the setting of ‘BHAGs’ – big hairy audacious goals – which was a phrase coined Jim Collins and Jerry Porras in their book ‘Built to Last: Successful Habits of Visionary Companies’.

“Covid taught us that because we invested in technology, we could react to issues that were happening in real time so could have a real competitive advantage over our competition,” says Donoghue.

The CEO says while creating value drives the business it has to be done in a sustainable way, which us why the company is going through the process of becoming a B Corp and members of the Better Business Act.

“It used to be I could bring people into my building because I had a gym, real coffee, pool table or a darts board,” he says. “People are now wanting to understand our environmental footprint and our policy around sustainability. We genuinely care about the impact we have.

“I really believe that good businesses can balance profit and purpose.

“By going through the process of becoming a B Corp it really forces you to step back and look at your business from the outside in. All staff get two paid volunteering days a year. I recognise that we are a good business but still have some work to do to be great. It’s a long journey.”

Sykes Holiday Cottages have previously been included in the prestigious Northern Tech Awards, which are based on sales and profit growth, but Donoghue insists he won’t be getting carried away by talk of becoming a unicorn.

“We are business that thinks for the long-term,” he says. “We think about our impact. If at the end of the next investment cycle, which is inevitable because in private equity there’s always a cycle, we end up having a valuation that deems us unicorn then fine but that’s not a driving factor in our business.

“We turn up to do a good job, create value but we don’t stand at the top of the mountain and say ‘look at us, we’re a unicorn’.

“I’m humbled every day when I come into the business and see the passion, energy and commitment of everyone in the business.

“The great thing about being a tech-led holiday business is you’re making memories. We’re taking people on holiday and that feels good.”