The received wisdom is to never launch a business with a family member – but Dutch brothers Wybo and Wilco Wijnbergen beg to differ.

His co-founder is serial tech entrepreneur Wilco, who serves as CTO. Founded in late 2020, the company works with landlords to transform traditional office space into modern, flexible and inspiring workspaces.

Wilco says the decision to launch a business together was taken with their eyes wide open. “Taking the step from siblings to co-founders was always going to be challenging – it was completely unfamiliar terrain,” he admits to TechBlast.

“We knew we had some fundamental values in common that would make things easier: a strong work ethic, honesty and communication were values that were instilled in us growing up.

“We delved into some personal priorities: we had very frank conversations about our financial needs, our external commitments and how we deal with failure.”

Wybo says it was crucial for the duo to be aligned on roles and responsibilities as well as the kind of working culture they wanted to create. “Speaking openly about how we want to run the business and what we want to achieve reinforced the fact that we would make strong business partners,” he says. “It also drew our attention to some areas where we might differ and how we could work through these.

“We learn from each other and have great fun at work. We need no more than two words to understand each other. Of course, we’ve had disagreements, where we decided to sleep on it for a night and up the conversation the following day – every single time that pause helped.”

In 2003 Wilco co-founded Empirion – now known as Otherside at Work – one of the first SaaS companies in the Netherlands. He later founded real estate crowdfunding platform vesTTree.com.

“To help us figure out if that was enough to successfully grow a business together, we worked through a list of questions [and] had some long conversations about everything – from why we wanted to build a startup and what motivates us, to what we do with our free time and what areas of our business plan we would be unwilling to compromise on,” he expands.

“The best part is the fact that our relationship as brothers got even stronger than it was before.”

infinitSpace was born out of a need for the office market to keep pace with the changing demands of key stakeholders including commercial landlords, business leaders and employees.

The COVID-19 pandemic completely changed the way people interact with workspaces, and the concept of working five days a week from the same desk in the same room – which was already becoming outdated – suddenly became obsolete.

The co-founders sat down with many office building landlords to discuss flexible working and the challenges it presented them: while operating a premium flexible workspace looks simple from the outside, in reality it is complicated. They also learned that many wanted to stay in control over their building rather than leasing it to an external operator.

On top of operational management, infinitSpace also takes care of sales and marketing, while a dedicated app help members to get the most out of their working hub – WeWork-style.

“We came together to address a problem that we had both observed, but from different angles: traditional office spaces were no longer fit for purpose and had to be redesigned into flexible and sustainable spaces that would attract modern workers,” explains Wilco. “We also knew that technology had a key role to play in the office of the future.”

Wybo says his time at WeWork was “invaluable”. “For one, I learned how to scale a physical business. WeWork scaled at a rate that hadn’t been seen before by selling a vision, rather than a product,” he says.

“I learned a lot about the human element of workspace, too – especially what working with purpose means to people, and how community and space can elevate one’s mind and outcome in life.

“Technology brought us so much, but it also took a lot away. One of the things that we generally miss most is the feeling of being part of something big – being part of a group of people where we feel connected on a human level.

“That is why fostering a sense of community is such an important guiding principle at infinitSpace.”

Aldgate Tower (below), a 16-floor, Grade-A glass building, is owned by Brookfield Properties and is a short walk from both the City and Shoreditch. Brookfield agreed terms with infinitSpace to operate its brand – beyond – in 60,000 square feet of flexible workspace which opened last month. The company will launch further locations in the coming months. 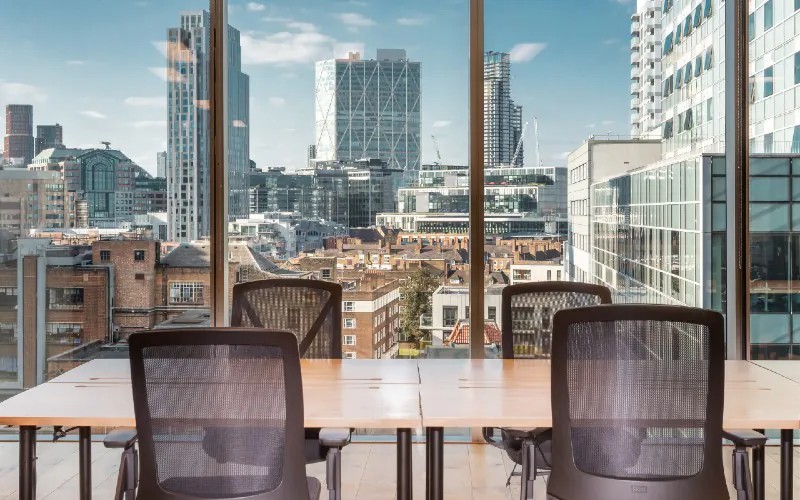 So what advice would the brothers give to other founders looking to start a business with a sibling?

“Talk about what happens if the company fails, how to make and take decisions, how many hours are expected to be dedicated to the company – and clearly divide responsibilities and accountabilities,” advises Wybo.

Wilco adds: “I highly recommend using a questionnaire that each sibling fills in individually and discussing the responses informally afterwards. You’ll get a strong sense of each others’ core competencies, expectations and fears before jumping into the project.”