Fast-growth EdTech ‘has a team of 20 entrepreneurs’

Zzish is giving teachers ‘superpowers’. Daisy Hill and Dr Charles Wiles explain a hiring strategy which has seen it go live in 177+ countries

Behind most successful startups is the driving force of a visionary founding team.

However their original idea can change direction due to myriad potential factors. Crucially, new products and revenue streams may also materialise as incoming talent adds to the collective effort.

Zzish, an EdTech startup on a mission to give teachers ‘superpowers’ which featured on our sister publication BusinessCloud’s EdTech 50 ranking this year, is an example of the latter. Founded by Dr Charles Wiles in 2014 after he watched his son struggle at school – and the subsequent lack of resources his teachers had to support him – the business is also led by Daisy Hill.

“Hiring the right people and trusting them to do their job is my biggest piece of advice to any startup founder,” co-CEO Hill tells TechBlast.

“We have the most incredible team. Originally we would hire talented people and try to fit them into moulds; but actually, there are some incredible people out there who are amazing at what they do and we have assembled a team like that around us… I feel like we have a team of 20 entrepreneurs in the company.

“When you can really trust somebody to do something, then they’re the people that fuel the growth for us. It’s rewarding and a real team effort.”

Hill cut her teeth at high-growth startups, while she also founded Useful Music with composer Graham Lyons, a startup providing original sheet music downloads tailored for learners and their instruments.

Upon joining London-headquartered Zzish, she helped co-CEO Dr Wiles target the product more towards teachers with Quizalize, a powerful platform that allows teachers to implement continuous formative assessments through fun and engaging quizzes.

With over one million pieces of content now available for teachers to use, Quizalize is used by over six million teachers and students in more than 177 countries.

Dr Wiles holds a PhD in AI & robotics from Oxford University. He worked in AI for Toshiba and Canon before joining Google as it was expanding in the UK. “I was its first product manager outside of the United States… I’m proud to say I was a small part of the team which built the first Android operating system.”

He adds: “I’m very fortunate to have found this amazing business partner in Daisy… I now code 90% of the time, which I really enjoy. I’m effectively the CTO!”

The serial investor also co-founded a mobile tour guide and app, Huntzz, with his brother. Asked for his own piece of entrepreneurial advice, he agrees that recruitment is key.

“I mentor younger founders and always say: the most important thing for you to do is to find your technical co-founder – your CTO,” he says. “But it’s not about the CV – a lot of people, including me, have made the mistake of hiring someone because they were amazing at Google or somewhere. They think ‘I’m so lucky to have that’ – but they’re not the right fit.

“You’ve got to find those people who are a cultural fit and have the right attitude: they like working in a startup and are passionate about what you’re trying to do. When we interview now, if we ask someone the question ‘what is your passion?’ and they don’t say education, they probably aren’t going to get hired because it is so core to what we do.”

Another essential tip for success is to identify what sets you apart from the competition.

“As a startup, you do lots of things that fail – and that’s okay,” he explains. “You don’t have to succeed with everything – you’re only trying to find one thing that succeeds.

“Every company that has really succeeded has found growth on the marketing side by doing something different that people haven’t done before. You’re not going to start a company today in any sector and become super successful because you’re good at SEO.

“When I was at Google, we were tracking 100 different user-generated content video companies and YouTube was growing a lot faster than anybody else. Why? They used [the now defunct] Adobe Flash for their video delivery. Flash wasn’t a delivery mechanism for video, it was for doing ads, so it was kind of a weird choice – but every browser in the world supported it so they were able to safely deliver video when others couldn’t.

“The second thing they did was they allowed people to embed their YouTube videos on their own websites. That wasn’t obvious at the time; it was almost counter-intuitive because it was really expensive back then to deliver video and you were allowing other people to enhance their websites and just putting a little YouTube logo at the bottom. However, that little growth hack made all the difference: it meant they won against those other 100 companies.

“So when it comes to growth, try to work out what one thing is going to do really well: it may make you better than everybody else and give you that hypergrowth.”

So what sets Zzish apart from its peers?

Quizalize allows for the implementation of differentiated teaching pathways that serve each student on an individual level. In the backend, a powerful data engine captures smart student data in real-time and displays the insights on dashboards, providing teachers, headteachers, and administrators insight into which students, classes, and even schools require attention, on both a micro and macro level.

Teachers – or parents – can sign up to the product for free, but there are limits on class sizes and the amount of data they can see and export unless they enter a paid subscription.

“I can say without any hubris that we’ve got the most sophisticated product in its class in the world,” is how Dr Wiles puts it.

“It’s a good indication of the state of some corporate training today that we did absolutely no advertising for corporate – and then Fortune 500 companies were coming to us and using our products for their training!” laughs Hill. “Now we are actively going after that market. We are seeing so much demand for it, and a huge gap to fill.

“Our software is fun! You don’t suddenly become boring when you hit 21 and leave education… you’d love to play a game as part of your working day!”

Dr Wiles agrees that gamification is crucial to learning & development. “I’m 52 – and I still play videogames! You’ve got a generation of teachers who grew up playing games and still love them.

“Gamification is super important in keeping you motivated to learn. When people design video games, they’re pulling those extrinsic levers of motivation – giving you points so you can see progress in what you’re doing, rewards so you feel you’ve achieved something.

“Gamification is not there just because it’s fun – it really does work as a technique for helping keep you motivated to keep playing, or learning in this case.” 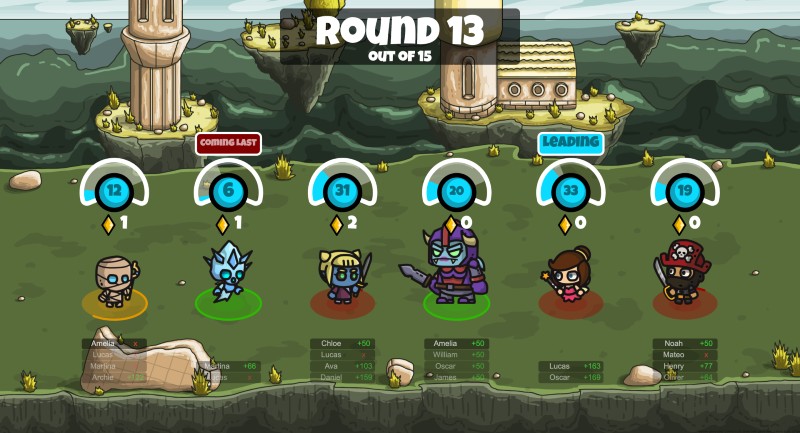 Leaderboards are fun for kids who are at the top of a class – but not so much for those at the bottom.

That is why Zzish now delivers a team-based classroom quiz game, the first company in the world to do so. “If the teams are consistent over time, you actually want to help your friends and teammates improve,” explains Dr Wiles. “They might ask: ‘How are you doing on your algebra homework?’

“That’s what we want to help happen – to make that kind of collaboration which has all sorts of positive effects. People who aren’t doing so well are not highlighted – and they’re still part of a team that could win.”

Those experiences are now moving into the realm of videogames themselves, such as Zzish’s ‘hero game’ Battlerzz (pictured above).

“There’s a class of games coming where people play as characters and they unlock new characters,” Dr Wiles adds. “Let’s bring that into the classroom because we know people love playing those kinds of role-playing games.”