As Simon Mellin and three of his friends settled down to watch an episode of Sir David Attenborough’s cult BBC series Blue Planet he had no idea how the programme would change his life.

The entrepreneur comes from a farming background and was shocked at how single use plastics were killing animals and choking the environment.

Although he didn’t realise it at the time the genesis of The Modern Milkman had been born during that one show.

The company witnessed 1,000% growth in 2020 as their mission to reuse packaging and deliver fresh ways for consumers to shop ethically and sustainably resonated with the public.

Speaking at TechBlast’s latest Going 4 Growth roundtable, Mellin recalls how it all began.

“Having worked in farming I’ve always been around food and done a couple of food-based startups before,” he says.

“We were a supplier to people at HelloFresh and Muscle Food and saw that nobody was thinking about the small basket, hyper frequency shopper.

“Then I watched Blue Planet with Sir David Attenborough and they showed the devastating effect single use plastics were having on our planet. That really hit home.

“At the same time I recognised a couple of big trends coming around sustainability and groceries and I recognised that logistics were powering the world and underpinning everything as we started to digitise and wanted things delivered conveniently.”

Together with some friends in Colne, Lancashire, who felt the same way, Mellin went searching for business ideas that addressed these problems and stumbled across the milk round. 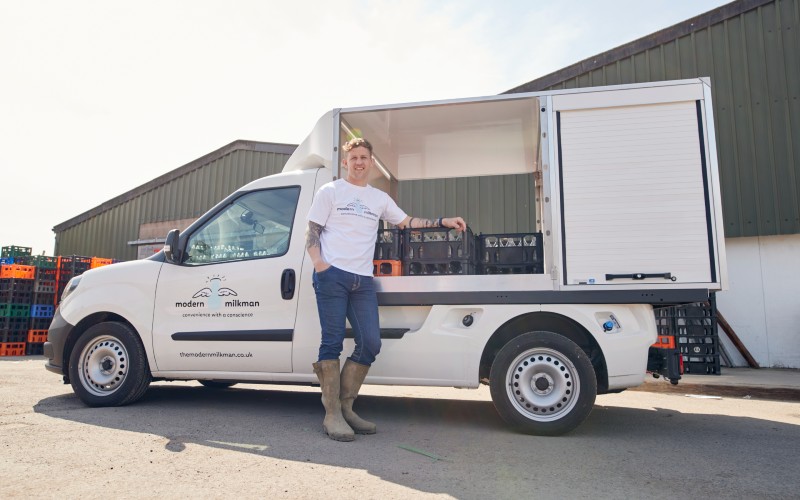 “It baffled me honestly how this business that fixes all these problems had completely died so I bought a local milk round with around 100 customers and this beaten up truck and set about getting up at 1am every morning to deliver milk,” he recalls.

“My girlfriend at the time, who I’m due to marry next year, said: ‘What are you doing? This is mental’.

“I quickly realised no-one had cash so leaving £3 on the doorstep didn’t work. Then I looked at how you managed your orders. Putting a note in a bottle saying you want an extra pint in the morning or getting a text message at 10pm was inefficient.

“However everybody still wanted it. If you ask anyone if they care about environment you get the same answer every time – ‘yes’ – but how do you make it easier for people to do the right thing?

“We quickly realised that that by wrapping technology around the proposition of the milk round we had something quite powerful.”

Together with his friends he founded The Modern Milkman in 2018 with the aim of making a positive impact on the planet and the communities they service.

The Modern Milkman’s mission is to revolutionise consumer habits by delivering fresh ways to return and reuse packaging, shop ethically, and feel good about convenience.

Everything is managed through an app so that shopping sustainably is made as easy and convenient as possible.

It’s a recipe that has appealed to investors with series A and B investment already raised, and negotiations on another fundraise ongoing.

“We have expanded rapidly in the UK and we launched in France about three months ago,” says Mellin. “That’s been going really well. There’s still a lot of head room to go at.”

However growing at 1,000% a year comes with its own challenges.

“It’s really hard to scale and I think everyone underestimates just how hard it is and it’s not linear,” explains Mellin. “It’s different in every business.

“As a leader or as a senior person that’s one thing but how do you normalise that for everyone else in the business because people are entering your business at light speed pace and you don’t really have time to onboard them properly although you do your best?

“You throw them into a role and then, before you know it, they’re underwater trying to run at this pace so you’ve got to really quickly try and normalise chaos with them

“It’s important to get them to be comfortable around the fact you can’t put every fire out and there are certain things you’ve got to ignore.”

Mellin’s solution is to get staff to focus on their three priorities.

“We talk a lot about three things in our business,” he says.  “Everyone has three things to focus on. If there’s stuff going on around our advice is to still care but don’t worry too much because these are the three things that we really want you to care about.