Can this man address the UK’s connectivity problem?

The UK has the 6th biggest economy but only the 43rd fastest broadband speed. Charlie Ruddy is trying to address the problem

Charlie Ruddy is a man on a mission to provide ultra high-speed broadband access to one million UK premises in the next five years.

If the CEO of Digital Infrastructure and Be Fibre is successful it will give his business a 3% market share.

Despite being flush with a £100m investment from Basalt Infrastructure Partners, it’s a big ask – but Ruddy is not your typical CEO, evidenced by his eclectic CV.

As well as trying to disrupt the UK broadband sector he also manages the Irish International Pool team, coaches his son’s football team and is a school governor in his spare time.

Our interview took place between the end of Storm Dudley and the beginning of Storm Eunice and Ruddy admits to having had a late night.

“We had 14 people working in Crewe last night and I went up there at 11pm to make sure they were alright,” he reveals.  “The safety of my people is paramount to see that they were in a safe environment.”

Ruddy only shares the story to illustrate the company’s different approach to recruitment. 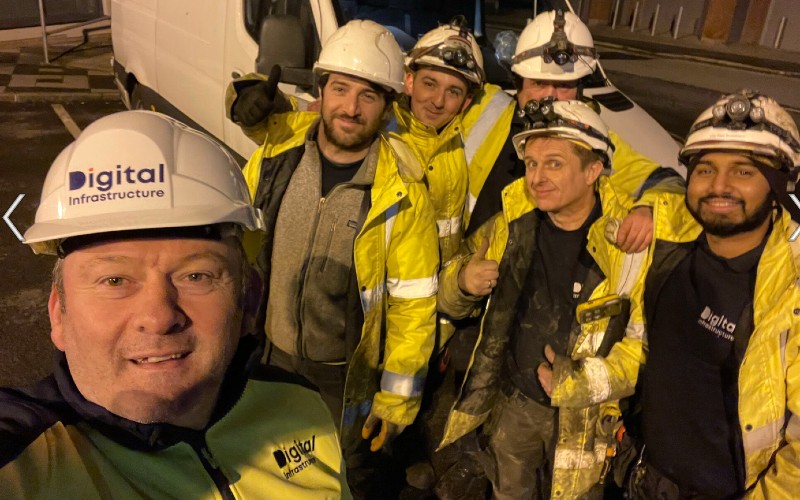 Charlie Ruddy, left, on site in Crewe with some of his engineers

“One of the guys there was called Peter and a year ago he was working as a shop assistant,” he recalls. “He’d never worked outside in his life and now he’s an engineer and loving it. That gives me a really warm feeling.”

If Ruddy gets his way, Be Fibre will go head-to-head with broadband heavyweights like Virgin Media, BT and Sky.

“We are a disrupter and we’re not embarrassed to say it,” he says. “It’s in our DNA.”

Ruddy finds himself in this position after a chance conversation a couple of years ago with self-confessed ‘fibre pioneer’ and expert in broadband technologies Carlos Bock while they were working at Amey.

“The UK has the sixth biggest economy in the world but only the 43rd fastest digital speed, which in broadband speeds makes us a third world country,” explains Ruddy.

“When countries are able to operate at speeds faster than us it enables them to move data faster and opportunities are lost and won based on the speed you can operate at.”

Ruddy says COVID-19, home schooling and working from home shone a light on the importance of fast, resilient broadband.

“Everything is going to be underpinned by the infrastructure we build in the coming years,” he says. “It’s almost future-proofing our children’s children experience. The digital revolution is much-needed and will reflect how the next 30-40 years unfold.

“Broadband speed has an impact in ways we can’t even measure yet. I’m a school governor as well and only last year it emerged 14% of students in the country did not have access to Wi-Fi, a laptop or some other means to work from home. I thought that was shocking.”

Together with Bock he’s on a mission to do something about it and has been backed with a £100m investment from Basalt Infrastructure Partners.

As part of that investment, up to 500 jobs are set to be created and Warrington-based Be Fibre has pledged to provide residential and business connectivity for 80 towns and cities by 2027.

Ruddy is also the CEO of sister company Digital Infrastructure.

“Digital Infrastructure is what you’d class as a communications provider,” he says. “Basically we build the assets across the country.

“We’ve got ambitions to build to one million customers in the next five years, which equates to 3% of all the households in the UK. It’s no simple challenge. The challenge is vast and we recognise that.

“The second company – Be Fibre – is what I call an ISP or Internet Service Provider. This will be the organisation that will sell products and services to the consumer.”

Ruddy says at the top end they’ll be supplying speeds that are 13 times quicker than the current average.

“The current average in the UK is 70 Mbps,” he says. “We’re looking to launch a product that could be up to a gigabit level. Not every consumer needs that so we’re producing  different product lines  so a consumer can cherry pick what they need for their particular services.

“People want to buy an experience. They want to know ‘if I’m working from home and my children are at home in the summer, can we all cohabit?’”

One of the biggest challenges facing Ruddy will be recruitment, which is the reason why he’s earmarked £2m for the creation of their own training academy.

“There’s a very particular skillset that we need and we recognise there’s been a gap in the market for a number of years,” he says.

“Unfortunately a lot of our peers and competitors are just going back to the existing market and have decided to pay people more rather than train new people up. If you pay someone 300% more than what the market is driving then a correction is coming.

“What we’re doing with our training academy is looking at hard-to-reach people. We’ve hooked up with a company called Inside Connections and will take people who have previously been in jail and we’re getting them back into society and into employment.

“We’re doing the hard yards. We’re looking at Kickstarter schemes, apprenticeships and giving people who have fallen on hard times a helping hand.”

“People can have a fantastic career with us, in a safe environment and be part of this amazing journey.”

‘Working in tech wasn’t as scary as I thought’

‘Working in tech wasn’t as scary as I thought’